Fiddler: A Miracle of Miracles

Fiddler: A Miracle of Miracles
In English – 92 mins.

Think you know all there is to know about “Fiddler on the Roof”? Think again! By turns funny, thought-provoking, and joyous, this new documentary explores the origin story behind one of Broadway’s most beloved musicals and its creative roots in early 1960s New York, when “tradition” was on the wane as gender roles, sexuality, race relations, and religion evolved. Intimate interviews with the show’s creators (and other arts-and-culture luminaries, like Lin-Manuel Miranda) reveal how “Fiddler” went from an unlikely production to a worldwide phenomenon whose universal themes still resonate today. 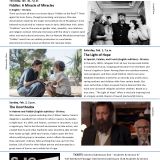