Gary: A Sequel to Titus Andronicus by Taylor Mac

“Maverick theater artist Taylor Mac’s singular world view intersects with Shakespeare’s first tragedy, Titus Andronicus. Set just after the blood-soaked conclusion of that sensationally gruesome tale, the years of battles are over, the country has been stolen by madmen, and there are casualties everywhere. And two very lowly servants are charged with cleaning up the bodies.” The play premiered on Broadway in April 2019 starring Nathan Lane and received seven Tony Award nominations.

“…[GARY] is fabulous and bedraggled: a defiant and beautiful mess.” —NY Times.

“…[GARY] is morbid and hilarious, poetic and gross, deeply absurd and born of undeniable urgency.” —Towleroad.com.

PARENTAL ADVISORY – Some content may not be appropriate for children. 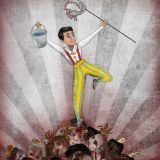