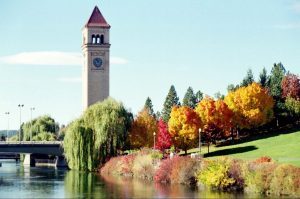 Another strong quarter for the Spokane economy

“The 3rd Quarter of 2016 continued to demonstrate the strength that has characterized the Spokane regional economy this year—strength that should continue not only into the 4th quarter, but also into next year,” says Shaun O’L. Higgins, Managing Principal of The Oxalis Group LLC, and a longtime observer of the regional economy.

“Contrary to the U.S. economy, which has been growing more slowly than in previous years, Spokane’s economy is having a very good year,” says Steve Scranton, Chief Investment Officer for Washington Trust Bank.

“The region is ending 2016 on an economic high note,” says Avista Chief Economist Grant Forsyth. “Going into the holiday season with a good economic foundation is important because it means retailers have a better chance of a successful holiday season which is key to their sales for the year.”

Doug Tweedy, Regional Economist for Washington State Labor Market & Economic Analysis, says, “We have a good foundation of employment in many sectors and I expect the growth rate in job creation to remain about the same as it has been the past three years.”

Permitting activity registered significant gains in nearly all categories. Scranton says there is “continued activity in the pipeline,” which bodes well for 2017, as permitting is a leading economic indicator.

Scranton notes that the vast majority of permitting activity remains on the remodel side, pointing to the tight supply of homes and Class A commercial property as the reason for the continuation of this trend.

Forsyth says Spokane is still seeing a big surge in multi-family housing being permitted, but “the market remains robust and we will have to see, going forward, whether the market can continue to absorb the additional units as they are completed.”

“Perhaps most significant, in terms of long-term impact on development within the Spokane city limits, construction will begin in the spring on the new pedestrian-bicycle bridge in the University District,” Higgins says.

He also notes, “Physically, the bridge expands and unifies the U-District. Metaphorically, it is a bridge to the future.  The U-District has been the source of much good news in 2016: The Gonzaga University-University of Washington Medical School collaboration; the recent accreditation of the Washington State University Medical School and planned private-sector projects in the expanded district. These developments greatly strengthen the region’s position in the nation’s health-care and bio-research industries.”

While there is a good mix of residential and commercial permitting, Forsyth points out that some of it is related to marijuana growing, processing and sales. The future of this business, currently legal in eight states, will depend on whether those supporting states’ rights or those opposed to legal marijuana prevail in the Trump administration.

The average sale price for 3rd quarter was $217,753, an increase of just over 6 percent from the same time last year.

“It is always nice to see solid growth,” says Scranton. “However, the tight housing supply has continued to put upward pressure on home prices, resulting in 6-to-10 percent increases in home prices compared to 2 to 3 percent income growth. Despite that, Spokane housing remains more affordable than most cities, particularly Seattle and Portland.”

In addressing continued concerns from some residents, Forsyth does not see the price increases as creating a “real estate bubble.”

“I look at the long term and Spokane housing prices are about where they would have been if the recession and subsequent drop in the real estate market had not happened,” says Forsyth.

Reminder: we use the CES database for employment because it is benchmarked with payroll data that covers a majority of businesses and has very little adjustment over time. However, the LAUS database is used for unemployment figures since this is not included in the CES database.

“Although Spokane’s recovery has been much slower than in many parts of the country for the past several years, but we are now gaining momentum — outpacing both the state and U.S. in employment growth,” says Scranton.

“The state number is heavily influenced by King County and I think we are seeing a natural phenomenon that extremely rapid growth cannot be sustained indefinitely, especially considering the Puget Sound area’s escalation of housing and commercial real estate prices,” Scranton adds.

Spokane had a 6.4 percent unemployment rate in the 3rd quarter, compared to the state’s 5.4 percent and the country’s 5.0 percent.

“Unemployment rose here by two-tenths of a percent as more people sought work,” says Higgins. “Unemployment remains stubbornly above the state level and, in particular, the national level which has now reached the “full employment” levels of only 5 percent.”

Forsyth notes, “When unemployment is in the low six percent range, that is indicative of a fairly tight labor market. Spokane has rarely gone below a 6 percent unemployment rate.”

“The labor supply in Spokane is growing because of the types of jobs we are creating,” says Tweedy. “In most markets, the labor supply is going down, while ours is going up. We are seeing an in-migration of those seeking jobs, including professionals and individuals with technical skills. This, along with our cost of living and quality of life, puts us in a good position to attract businesses looking to relocate.”

Forsyth says it is a healthy sign that our labor force is growing. He expects to see most of the upcoming job creation in the service sector, noting his one area of concern is manufacturing. “There is a mini-recession nationally in manufacturing, partly due to the strength of the dollar.” Regionally, he notes there is “upward pressure on wages. Income in our area is growing faster than inflation, which we have not seen in a long time.”

“The latest update [September 2016] ranked Coeur d’Alene 16th, Lewiston 22nd and Spokane 26th-best MSAs for job-growth in the nation on a year-over-year basis. Compared to the previous September (as opposed to the quarterly averages), Coeur d’Alene had increased its employment by 4.3 percent, Lewiston about 3.9 percent and Spokane about 3.7 percent.

Higgins continues, “The year-to-date and 12-month moving-average rankings were less strong, but all three of the MSAs ranked in the top-third of the nation, and all well above overall U.S. job-growth rate of 1.7 to 1.8 percent, depending on which methodology was used for comparison. Year to date through Q3 2016, the Spokane-Spokane Valley MSA (which includes Spokane, Stevens and Pend Oreille counties), added 5,740 jobs, which means we had accelerating job-growth heading into the year’s final quarter.”

Reminder: sales tax reporting lags one quarter behind other indicators.

“The reported 2nd quarter figures continued a trend toward increased spending in the region, with retail trade taxable sales rising 5.8 percent compared to the same quarter last year,” says Higgins. “That trend is likely to continue and even accelerate when 3rd quarter and year-end figures are released.”

While characterizing current retail sales as “very strong,” Scranton and Forsyth both caution that when ultra-low interest rates rise, there is likely to be a sizeable drop-off in auto sales, as well as home sales which then stimulate furniture, appliance and home improvement purchases.

Forsyth also points to the continued rapid increase in online sales as an area of concern. “Since 2004, e-commerce has grown at about 20 percent per year. It has gone from 0.5 percent of retail sales to 3 percent. This creates uncertainty about the future role of “brick & mortar” stores and concern about the tax revenue that is no longer being collected to fund local, regional and state governments.”

Cargo levels dropped by a comparable amount – 2.7 percent. Woodard notes that past cargo increases related to consolidation of mail shipments have now “been absorbed” and these numbers do not necessarily reflect a decrease in other cargo.

Next spring, building site improvements and roadway support will commence for the future construction of a gas station convenience store on airport property. Woodard points to limited nearby options for filling gas tanks of rental cars. “With about 200,000 rental car transactions at the airport last year, we identified this as an important customer service opportunity.”

“We saw a blip in inflation, year-over-year, to 1.12 percent, compared to zero inflation in the 3rd quarter of 2015,” says Higgins. “The increase can be traced to significantly greater employment, improvements in median household income and increases in aggregate income. There are simply more people spending more money, which drives up prices on many goods and services, even when, as now, grocery and fuel prices are below year ago levels.”

Scranton notes that most of inflation has been in services rather than goods, with the low price of fuel helping hold down the CPI.

Doug Tweedy: I am encouraged for our employment prospects in 2017. We have enjoyed three straight years of significant job growth, adding nearly 15,000 jobs, many in the higher-wage professional and technical area. Employment growth should continue in 2017 and we will see the multiplier effect, particularly in leisure and hospitality, from previous job creation.

Grant Forsyth: Local and national businesses will be watching to see the impact of the new minimum wage law in Washington state, which will increase the minimum wage from $9.47 to $11 in January, and will eventually raise it to $13.50 by 2020. It also mandates employers to provide paid sick leave. Most academic research on increases in the minimum wage has looked at one-time small increases, so the larger, multi-year increases in Washington will be “uncharted territory.” However, I believe the short-term effects may be very different from the longer-term effects – say in five years.

Steve Scranton: The election not only polarized voters, but it has created a great deal of economic speculation that is at polar opposites – some very optimistic about the upcoming business climate and others very worried. I tell people that during times of uncertainty, stay focused on whatever has made you successful, whether as an individual or as a business, and try not to get too caught up in the speculation.

Shaun Higgins: Looking ahead most of the models I’ve seen are currently showing U.S. economic expansion continuing its long, snail-like progression for the next five years. Some prognosticators call this “the new normal.” Projections of annual GDP growth of 1.7 to 2.2 percent a year for the next five years fall far short of the average long-term annual growth rate of 3.22 percent. This means there’s no boom in sight—but certainly no bust.

The regional economy is a subset of the national economy, but one that I expect to fare better than the U.S. overall. I also expect it to post slightly smaller gains in key sectors than has been the case this year. Job growth should come in at about 2 percent in Spokane (about 4,800 jobs), retail sales will likely rise about 4 percent; home sales are likely to hold steady but with prices rising about 4 percent.

The Spokane Regional Business Barometer is a quarterly publication written by Debbie Rauen of Legendary Hills Communications, highlighting the Spokane economy and local economic trends. Data is assembled by the Eastern Washington University Institute for Public Policy and Economic Analysis.