The Spokane International Film Festival (SpIFF) is a small, selective offering of world-class films. These are the very best features, documentaries and shorts that have been made around the world during the past two years but have not yet been commercially released for wide distribution. In fact they are some of the same films that played Cannes, Toronto, or Vancouver film festivals, and our programmers travel widely to screen and select them.

A major attraction of the festival is the presence of the filmmakers and performers themselves as our guests. They meet the audiences, share their own stories and anecdotes about the making of their films, and answer questions from you the audience. The discussions are lively and educational and a favorite part of the festival for both filmmaker and audience.

Additional festival events include after-film receptions, which are open to the public, and held at various downtown locations. In 2010, SpIFF added filmmaker forums, and, as the festival grows we plan to include seminars, script readings, and additional film-related events.

The festival is overseen by its parent, the Contemporary Arts Alliance, with an active Board of Directors and generous financial support from a variety of local and regional underwriters. 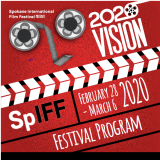