GSI: In Business, In Person

Who are these people, anyways?  How did they get to the Spokane region?
Why do they stay? 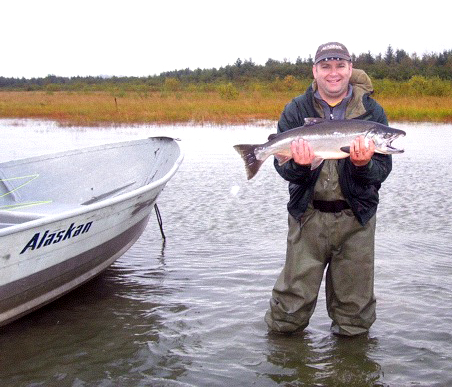 I pulled Brian aside after a Greater Spokane Incorporated
breakfast at Northern Quest’s new hotel. In part, the Q&A was an excuse to enjoy that new-hotel smell and sit before the massive stone fireplace in the lobby. That’s where we talked fishing, beer making, and about Brian’s website development company. http://www.sitecrafting.com/ More about the fishing and beer later. First:

It Started in Grade School

Brian was an elementary school teacher in Tacoma in the mid-nineties when students’ parents started querying him about the Internet. Brian said, “Their trust allowed me to help… It’s like buying your first car. You don’t know the right questions to ask.” Brian left teaching and founded SiteCrafting in 2001. The company is based in Tacoma, where 24 techies design and support websites and applications. Last year, SiteCrafting expanded into Spokane, where three web developers (as they say on their own site), “convert caffeine to code…”

Brian graduated from Gonzaga University, where he played baseball, majored in Philosophy and Theology and minored in home brewing (the last part is a joke). He has family here and said he’d always wanted to return, or at least, return with his company (Brian lives in Olympia and travels frequently to Spokane). He said, “I saw a big opportunity in a niche where you don’t see a lot of competition…And personally, I think Spokane is a special place to be. There’s a high quality of life for my employees and their families.”

On Expanding During a Recession

“It’s been challenging,” Brian said. “We had to create our own reality where we weren’t going to sit back and wait. It’s like snow skiing. We couldn’t wait for the hill to come to us. The decision to expand to Spokane was huge. If we’d have waited until after the economy turned around, it would’ve be too late.” And Brian said the team is learning from mistakes, like not having enough access to cash, which slowed hiring. SiteCrafting found a new local banker willing to lend more money. “You can’t run a company like ours like a lemonade stand,” Brian said. “You may have a big contract with a national firm that pays out over a year. We needed financing to keep up with growth.” So far, SiteCrafting has developed websites locally for KSPS-TV, Pacinian, the City of Spokane and CleenNW. The company also awards “Gear Grants,” providing free web design for nonprofits. They’ve awarded the initial Spokane Gear Grant to Vanessa Behan Crisis Nursery.

Brian said he first was indoctrinated into the philosophy of “active service,” while working at the Walt Disney Company. “Active service means always answering with a yes,” said Brian. “The key is to empower employees. If I have a dissatisfied customer, I never want them to say, ‘I don’t know if I can help….I have to ask Brian.’ I’d rather they take care of Mr. Smith today and tell me later, ‘I gave him 3 months of free service.’ Then I’d ask if that were enough.”

Spend a nanosecond  reading Brian’s tweets on Twitter (his handle is brainfroth, a scrambling of his name) and you’ll see his universe includes much more than www’s and hyperlinks. He has a wife, three kids, a home brewing habit he picked up while at Gonzaga (“I was legal,” he said. “We were just thinking it would save money.”) And Brian makes an annual pilgrimage to Alaska to fly-fish (favorite movie: “A River Runs Through it.”). It’s the kind of work-life balance he encourages for employees, too, which may be why SiteCrafting won a “Top Place to Work” award in 2008.

Get Out There and Get Involved

Brian joined GSI after the organization helped him expand SiteCrafting to Spokane. He wants his staff to become more involved in GSI’s networking events, workshops and seminars: “You get out of it what you put into it,” he said. He also encourages mentorships: “Especially for an early business owner, you think you’re the only person who’s had issues like cash flow problems. It’s like a kid with a pimple thinking he’s the only one… It can be a lonely place running a business. You have to be the rock.”

Thankfully, the Inland Northwest is home to a diverse rock pile of people willing to share stories, ideas and the occasional home brew.