Permit Numbers and Valuations Go in Opposite Directions 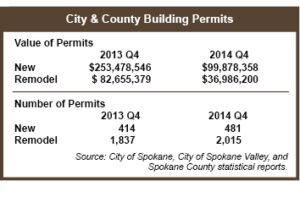 Shaun O’L. Higgins, Managing Principal at The Oxalis Group, LLC, points out, “No one expected fourth quarter 2014 valuations to match 2013, which was unusually strong, particularly in the City of Spokane. The magnitude of the drop — from approximately $239 million to just over $52 million — looks alarming at first glance. However, it is not of major concern when compared to the 2012 number of about $55 million, the 2011 number of about $40 million and the 2010 number of about $41 million.”

“Permit valuations in the City of Spokane in 2013 were heavily influenced by the Convention Center expansion and the Davenport Grand Hotel,” says Steve Scranton, Chief Investment Officer at Washington Trust Bank. “It’s not unexpected to see this big drop in valuations because we didn’t have any projects of similar magnitude in fourth quarter 2014.”

Generally speaking, Avista’s Chief Economist Grant Forsyth says the construction market is “healthy and growing at a reasonable rate.” He says permits are still being issued for large apartment complexes and activity in construction of single-family homes is “pretty good.”