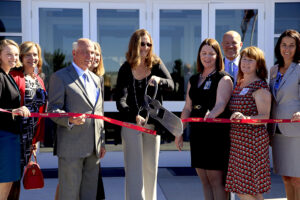 Comcast celebrated the grand opening of its new 80,000-square-foot National Center of Excellence customer support center, Wednesday, September 14. The Liberty Lake facility represents a total economic impact of more than $95 million and will provide jobs for more than 700 employees once the facility is fully built out.

Several local officials and Comcast personnel from across the nation were on-hand for the event, in addition to a large number of employees working at the Liberty Lake site.

GSI worked with Comcast during its site selection process, which included evaluating a variety of potential facilities in the Spokane region. As the region’s largest business development organization, GSI introduced Comcast to workforce experts and similar businesses in our region, in addition to providing an incentives portfolio that highlighted benefits to doing business in Washington state.

Comcast chose to build in the Meadowwood Technology Park in Liberty Lake. During the construction, they operated out of a temporary site in Spokane Valley.

Instead of Comcast’s initial outlook of 600 jobs, the company will employ more than 700 at its new Liberty Lake customer support center. Reservists, veterans or their direct family members will fill at least 15% of these positions. Comcast will also invest $27 million each year in employee salaries and benefits which include tuition reimbursement.

Employee amenities at the facility include a “grab and go” cafeteria, fitness center, and state-of-the-art communications technology lab.

As of the facility’s grand opening, Comcast has hired more than 400 employees. The company, however, continues to hire for the facility, and has openings available at http://cmcsa.jobs/SpokaneWA. To read the full press release regarding the opening of the new Center of Excellence, visit our News page.