“When all arrows are pointing in a positive direction, there’s a natural tendency for observers to engage in victory chants, and Spokane has recently had some good news to crow about,” says Shaun O’L. Higgins, Managing Principal of The Oxalis Group LLC, and a longtime observer of the regional economy.

“And why not? Unless the crowing blinds or distracts us from maintaining the current momentum, it will likely fuel more robust growth going forward.”

“We’re in the midst of a pretty good local recovery,” says Avista Chief Economist Grant Forsyth. “It started at the end of 2012 and we have made really good progress since then.”

“The mood in Spokane is a lot more positive than it’s been in a while and the numbers seem to support that. I would classify the numbers as ‘solid’,” says Steve Scranton, chief investment officer for Washington Trust Bank.

Higgins adds, “When I look at the second quarter numbers, I’m struck by the consistency of progress across the range of indicators.”

Since the recovery began, the biggest jump in second quarter real estate numbers was from 2012 to 2013. Results were more mixed from 2013 to 2014. Current numbers are positive across the board.

Unit sales for single-family homes were up 4.85% for second quarter 2015 from the same period last year. This compares to year-over-year increases of 10.2% and 39% in the preceding years.

Dollar volume for second quarter was up 8.2%, compared to increases of 6.1% and 57% in preceding years.

“These are respectable numbers,” says Scranton. “This level of increase in pricing keeps homes in Spokane more affordable than in many other cities and I would much rather see steady improvement than the runaway numbers in markets like Seattle.”

While the single-family real estate market is enjoying strong demand, Forsyth sounds a cautionary note for the rental sector. “The big story in residential real estate is the apartment market.

“We have been experiencing an historically low vacancy rate for apartments. It will be interesting to see how the market absorbs the very large complexes that are coming online and that are still being permitted. Will all the new units put pressure on apartment rates? Will there be an oversupply of units or will they be needed? This is an issue not just for Spokane, but for many metro areas.”

Steady growth in job creation Reminder: We are now using the CES database for employment because it is benchmarked with payroll data that covers a majority of businesses and has very little adjustment over time. We continue, however, to use the LAUS database for unemployment figures since this is not included in the CES database.

Economists describe the employment numbers for Spokane in the second quarter as “encouraging,” “strong,” and “respectable.” Spokane County added 7,200 jobs in second quarter 2015 compared to a year ago, doubling the rate of job growth from 1.5% to 3.1%.

He notes the construction and manufacturing sectors are also strong, with “marked increases in advanced manufacturing” and he credits the new WSU medical school with helping add jobs in both private and public education.

Tweedy is pleased to see more opportunities for youth entering the labor force. “While youth unemployment is still high, we are now adding jobs in industries offering entry-level positions, such as retail, leisure and hospitality.” He points to the opening of the Davenport Grand as an example of this.

“Since the start of the recession,” says Forsyth, “the labor force has been declining in Spokane, but it has finally stopped falling and has stabilized. This reflects that people are more optimistic about their prospects of finding work. Our labor market has tightened considerably.”

Spokane’s second quarter unemployment rate was 6.1%, down from 6.6% a year ago and significantly lower than the 5-year high of 9.9% in 2010.  The state unemployment average in second quarter was 5.2%, nearly the same as the national average of 5.3%.

“While unemployment in Spokane is still above the state and national averages,” says Scranton, “we have seen steady improvement in job growth over the past three years. If we can have steady job growth of 2 to 3%, it will be better in the long-term.”

“Total payroll in Spokane County rose 3% in 2014 and is projected to rise even more in 2015,” says Tweedy. “That means there is more money in the community. Wages and payroll account for 57% of all income in the county.”

Tweedy notes that one of our community’s biggest challenges is replacing retiring workers in a wide variety of industries. “While a diverse job base is positive for long-term employment in Spokane, it adds significantly to the challenge for our workforce development people to prepare a labor pipeline for such diverse industries.”

Retail sales remain on the upswingReminder: Sales tax reporting lags one quarter behind other indicators.

“Overall Taxable Retail Sales rose 6.7% in the first quarter of the year” (the most recent quarter for which we have official figures), says Higgins. “That’s a great number, especially because it includes almost no inflationary factors. Even more exciting is the fact that retail sector sales grew by more than 9%.

“Since regional CPI is running only about half a percent higher than it was for the same period a year ago, we have a very good, real-dollar comparison for consumer spending – a picture that makes clear that consumers are showing their confidence in the economy through their spending.”

Scranton points out that Spokane County retail sales increases are far better than those for the U.S.

Both Forsyth and Scranton continue to express concern because a large component of taxable sales is vehicles, continuing a multi-year trend.

“I believe demand is being pulled forward by zero-interest financing and it is not sustainable,” says Scranton.

Forsyth says, “Wage and income growth is not that strong and vehicle sales could drop quickly when interest rates begin to go up.”

Higgins sounds a more optimistic note. “Consumers are taking advantage of low inflation, lower fuel costs and somewhat higher wages. Since interest rates and market returns are currently low, many consumers may be realizing that a dollar spent wisely on goods and services may, in fact, be better than a dollar saved or invested at dismal returns. At least, that’s what the numbers indicate to me.”

He concludes, “Anecdotal evidence and early non-official reports indicate that second quarter 2015 will show an even bigger gain over last year. I suspect the rest of the year will continue the trend, which is very good news for local retailers, regardless of sector.” 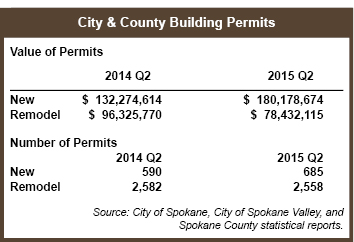 Both permit numbers and valuations were up for all of Spokane County, with an increase of 2.2% in permits and 22.6% in valuations for second quarter 2015 compared to the same period in 2014.

The increase in permitting valuations for the entire county came almost exclusively from new construction, which is a big change from last year. New construction valuations in second quarter rose 36% to $180 million. The valuation of remodeling permits remained virtually unchanged in the $78 million range.

The numbers were mixed for the City of Spokane Valley, with a 7.7% increase in the number of permits but a decrease of 31.6% in permit valuations.

Unincorporated Spokane County had a decline in the number of permits – down 7.8% – but the valuations took a huge leap and were up 84.3%.

Scranton characterizes permitting activity as “respectable, but not fabulous.”

Forsyth points to some of the permitting increase as coming from cannabis-related businesses that have specific needs for indoor growing space. Overall, he says permitting is more balanced, with increased activity in both industrial and commercial construction.

Total passengers reached a 4-year high for the second quarter and showed a 4.8% increase over the same period last year. Cargo had an even larger gain, growing 13%. This continues the positive trends of the past two years.

Woodard credits Delta’s new flights between Seattle and Spokane as one of the factors in the passenger growth, year-over-year, for second quarter.

Spokane International Airport continues to make improvements for safety and customer convenience. The expansion of the cell phone parking lot was completed earlier this summer. Lactation stations, modular units that will provide a clean, secure and discrete place for women who are nursing and would prefer a more private setting,  are being added in September.

Interest rates trump inflation, all eyes on the Federal Reserve

With the CPI in the second quarter at 0.47%, a big drop from last year’s 1.92%, “no one is talking about inflation,” says Scranton. “Inflation rates will be subduedthrough the end of the year because of lower energy costs.”

Forsyth says economists around the world are waiting to see if the Federal Reserve will raise interest rates later this year, as anticipated, or if Chairman Yellen will decide to wait.

“Global economic growth is weaker than expected and particularly with the situation in China, there will likely be lower prices on imports. This, in turn, will create an incentive for domestic products to lower their prices to compete. For that reason, I don’t see a lot of price pressure in the future,” says Forsyth, “not for at least a couple of years.”

Scranton concurs. “The U.S. does have the strongest economy right now, and that could prove challenging for local businesses, both those that export and those competing with imported goods. There will definitely be smaller profit margins for some businesses because of this.”

Shaun Higgins:  The second quarter 2015 numbers, compared to those of the same period a year ago, clearly indicate a significant increase in economic activity here – more than 7,000 additional people employed; traffic in both cargo and passengers up at Spokane International Airport; retail sales up significantly; housing sales up for units sold, median price per unit and average price per unit; and, county-wide building permits up. The single-family home numbers are at 6-year highs for the quarter, as were taxable sales and retail-sector sales. What’s not to like?

Grant Forsyth:  The future of Fairchild Air Force Base is hanging out on the horizon. The military will need to do some significant downsizing and is interested in reducing their real estate footprint. There is a great deal of resistance in Congress to addressing this issue, particularly ahead of the Congressional and Presidential elections, but at some point there will need to be action.  There are many efforts in the community, with leadership from GSI, focused on keeping Fairchild open, but this is a very specific regional risk that everyone should be keeping on their radar screen.

Steve Scranton:  The Spokane economy has shown steady progress but we need to pay attention to the global issues, which could have an impact on even local businesses. I think the Federal Reserve has painted itself into a corner and will have to raise interest rates before the end of the year, but those increases will be at a far slower pace than we have seen in the past.

The Spokane Regional Business Barometer is a quarterly publication written by Debbie Rauen of Legendary Hills Communications, highlighting the Spokane economy and local economic trends. Data for the publication is assembled by the Eastern Washington University Institute for Public Policy and Economic Analysis.