STEM, Cyber Security, and Why We Support Education 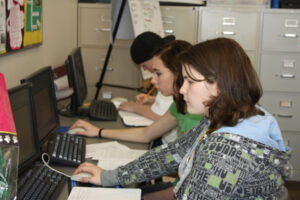 Why do we support public education? Because when a community supports its schools, the community thrives. Our community is strong right now because of things happening in our area schools.

Mead School District will start a new STEM Academy that will begin this fall at the Riverpoint campus. STEM (Science, Technology, Engineering and Math) jobs are high-demand nationwide, and this academy will give students the chance to earn college credit while learning together in an interdisciplinary setting.

“….growth in STEM jobs has been three times greater than that of non-STEM jobs over the last 10 years. And throughout the next decade, STEM occupations are projected to grow by 17 percent, compared to 9.8-percent growth for other occupations.”

The Mead STEM Academy will focus on the “learn by doing” philosophy and solving problems so students can think critically. This story from KREM2 outlines the new academy’s importance:

Another piece of great news is that seven – seven! – teams from four Spokane high schools will compete in the National High School Cyber Defense Competition in Washington D.C. next month. Between two divisions, there are 24 teams total. Spokane’s teams represent almost 30 percent of the teams at the national championships!

Four teams are from Rogers High School, while North Central, Lewis and Clark, and Ferris high schools will each send a team.

The Cyber Defense Competition replicates real-life cyber security situations faced by network administrators, as this Spokane Public Schools news item states. Teams are given a computer system that has been hacked, and have six hours to find and fix the hacking. In the championship round, things get difficult. Teams face the same problem, but six to 12 systems are networked together, with another team on site tasked with breaking the network. Students are gaining skills needed to one day take into the workplace.

Among the competition is Marshall Academy from Virginia, MIT Lincoln Laboratory in Massachusetts, Monroe Career and Technical Institute in Pennsylvania, and many more. Seeing Spokane high schools next to names like that makes this community proud.

This is why we support our public schools. Without community support, these opportunities might not be available for our current students (and future employees).