Register at https://ignitetalksoct.eventbrite.com for Ignite Talks on October 15th for a conversation about technology, innovation and venture capital with John Connors of Ignition Partners. The online program begins at 12:00 pm, with plenty of time for questions via chat and video.

John is a veteran technology-industry executive. He has been a partner at Ignition since 2005 focusing principally on investments in enterprise software. Prior to becoming a venture capitalist, he spent sixteen years at Microsoft in multiple executive roles including Chief Financial Officer. He was named to the 2013 Forbes Midas List and to Business Insider’s 2013 list of top enterprise technology VCs. John's current Ignition Partners investments include Tempered Networks, Kensci, Symend, Icertis, Tractable, and MAKA Autonomous Robotic Systems. He is also an Operating Partner of Fuse Venture Partners, an early-stage, venture capital fund investing in Seattle-based Seed and Series A B2B technology companies. John is a member of the board of directors of Nike and Splunk. 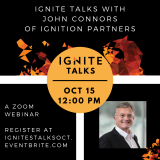