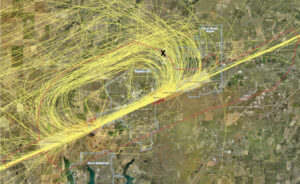 Greater Spokane Incorporated (GSI) and Forward Fairchild are deeply disappointed in Governor Inslee’s announcement today that he is approving the Spokane Tribe’s Casino Project over the numerous objections from our community as the location poses a severe threat to the future of Fairchild Air Force Base (FAFB). GSI has been advocating and working to protect jobs at FAFB for more than 50 years. FAFB remains one of GSI’s top community priorities and opposes any activity that could impair current and future missions on the base. GSI is also the founding member of the Washington Military Alliance, established by the Governor, and among WMA’s top priorities is the prevention of encroachment at all Washington military bases.

FAFB has approximately 2,000 flights per month, and current flight patterns fly directly above the Spokane Tribe’s development site. This presents noise, light and safety concerns that will likely force the alteration of flight patterns, and affect the quantity and times of flights, the amount of fuel used and the expense to fly those training missions. Although alternative locations for this development have been presented to the Spokane Tribe, they have chosen not to pursue them.

GSI and others have repeatedly expressed these concerns to the Governor’s office as the development site also falls within Military Influence Area (MIA) of the Joint Land Use Study (JLUS), which precludes sensitive uses such as hotels, child care centers, hospitals and public assembly facilities. If a private developer, such as a hotelier, proposed a similar development, it would not be allowed under current land use regulations.

Because FAFB has already been subject to several rounds of Base Realignment & Closure Commission (BRAC) proceedings and anticipation of a Federal sequestration will likely lead to another round of BRAC, any measures that impede progress or threaten adaptability of the base are of serious concern to GSI.

The Air Force has also adjusted its strategy to decide where the new KC-46A tankers will be assigned, and is now in the last round of assigning new tankers. Instead of the Air Force limiting the focus to bases that can accommodate 36 aircraft, the Air Force has opened consideration up to any base that can accommodate up to 24 aircraft, which opens up the competitive pool substantially. In the meantime, the Base’s current mission is going to be phased out. All of this impacts the future of the FAFB’s aerial refueling capabilities.

GSI is a proponent of growth and job creation, but not if that growth creates encroachment concerns that threaten the 5,700+ jobs already in effect at FAFB and the $1.3 billion in annual economic impact FAFB has on our region and community.