Freight Mobility in the Inland NW 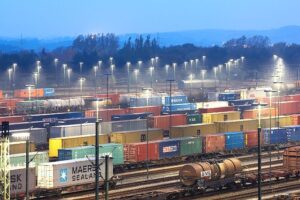 The ability to move goods efficiently is vitally important to any economy, but especially in Washington state and the greater-Spokane region because, as noted by Schinfeld:

With Spokane-area manufacturers, agricultural producers, and forestry and mining companies exporting $800 million worth of goods annually, quality infrastructure is key to getting those products to market. Eric also noted that freight congestion on Washington highways costs shippers more than $3 billion per year.

Ashley highlighted the recently passed state and federal transportation packages and their potential impact on the Inland Northwest. Connecting Washington is a 16-year package with $16 billion in additional transportation revenues. The package includes $879 million earmarked for the completion of the US 395 North Spokane Corridor.

FMSIB was created by the Legislature to identify and recommend investments that improve and mitigate freight movement on strategic state corridors, grow jobs and the economy, and bolster Washington as a leader in international trade.

FMSIB’s 2016 call for projects begins this month with awards in late spring or early summer. Projects are selected based on state criteria, project scoring and Board selection.  Ashley stressed that when communities are exploring projects they need to plan (years) ahead and that successful projects are typically part of a consistent community vision.

Also unveiled at Keep Trade Moving was a study by WCIT revealing the economic impact of the 2014-2015 West Coast port slowdown. Some of the study’s conclusions about the slowdown:

Spokane County businesses exported $800 million worth of goods in 2014. GSI’s International Trade program works to enhance the regional economy and support job creation through the continued growth of this local trade activity.