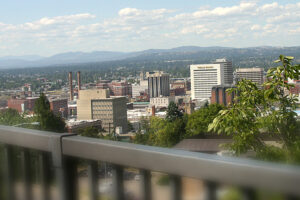 “All indicators remained positive, and increasingly so, for the Spokane-Spokane Valley Metro Area in the third quarter,” says Shaun O’L. Higgins, Managing Principal of The Oxalis Group LLC, and a longtime observer of the regional economy. “Steady, ongoing economic strength means we will continue progressing toward full recovery from the depths of recession.”

Avista Chief Economist Grant Forsyth characterizes the regional economy as “very strong.” He says, “It’s important going into the holiday season to have a strong third quarter, particularly with the windstorm occurring just before the holiday sales. The stronger the economy when a natural disaster hits, the more quickly the economy and retail sales will rebound when it’s over.”

Higgins adds, “Aside from the numbers per se, positive psychology is helping Spokane keep things moving. Current public and private investment is robust, particularly in Spokane, which will continue to benefit from a 20-year program to improve and maintain streets, wastewater management and parks. Advances in the University District; private development and revitalization occurring in the vicinity of the new Grand Hotel; the approval of new health sciences and medical school programs; and anticipation surrounding an upcoming, first-of-its-kind World Figure Skating event, are only a few of many developments that bode well for the city and the region it serves in 2016.”

“Spokane’s year-over-year employment growth of 3.1% for the third quarter was nearly double the U.S., but still lagged slightly behind the state’s 3.4%, which is driven heavily by the Puget Sound job market,” says Scranton.

Meanwhile, the local unemployment rate continues to fall, from 7% last year to 6.2% for third quarter year-over-year. “Unemployment rates are coming down in Spokane and across Eastern Washington,” says Tweedy, “which is a good sign for the future.”

Total non-farm employment for the Spokane-Spokane Valley MSA in third quarter was 237,900.

“The market is beginning to turn in favor of job seekers,” says Forsyth, “and it is tight enough that workers have better negotiating power, especially those in skilled and professional categories.”

Scranton concurs. “The pockets of labor shortages in certain industries, which tend to be those with higher paying jobs, is something we should be watching in 2016. If this continues, we will start to see stronger wage growth, which has been stuck in the 2-to-2½ percent range for quite some time.”

Tweedy adds that because of increased job vacancies, we are beginning to see an in-migration of workers to Spokane County from Eastern Washington and North Idaho.

“Construction permitting is a leading indicator of future employment growth and it is stronger in this area than we have seen in years, particularly for industrial construction,” says Forsyth. “However, U. S. industrial production has clearly weakened due to the strength of the dollar and its negative effect on imports, and that could impact our regional employment. This is mostly a concern for manufacturers engaged in global trade.”

Tweedy says, “The number of manufacturing jobs in Spokane County has flattened, but manufacturing production is still up. Construction employment, which was hard-hit during the recession, is increasing but is still below peak. After almost two years of strong growth, jobs in professional, scientific and technical have reached a plateau, as expected after a long period of growth.”

Reminder: Sales tax reporting lags one quarter behind other indicators

“These are solid numbers,” says Scranton, “and they put us right in the middle of the pack in the state. We are ranked #19 out of 39 counties in Washington.”

“Generally speaking,” says Forsyth, “taxable sales continue to grow faster than income and this is not sustainable. Taxable sales have been in the 6-to-8% range and income growth has been around 4 to 5%. For this reason, it is important for local governments to base their budgets on long-term revenue trends rather than the recent growth rates.”

Forsyth and Scranton again express caution that vehicle sales, which have been a significant driver of taxable sales increases, are likely to drop when interest rates go up and zero-interest financing goes away.

Higgins notes, “At this time last year I projected that consumer spending would accelerate in 2015 directly as a result of higher incomes and lower gasoline prices. Indirectly, lower costs associated with travel and shipment of food and other products have enabled consumers to pump money into something besides gas tanks. Cumulatively, higher incomes (up 11% in the city of Spokane, according to a recent report), a bit of population growth and steady-to-lower prices have fueled consumer spending, measured by sales-tax collections.”

Unit sales in real estate were up an eye-popping 21% year-over-year for third quarter, while volume increased even more – 29% — creating an additional $97.7 million in sales volume over the previous third quarter.

Scranton does not think the numbers are sustainable. “We can’t expect 20+ percent increases for more than a quarter. Spokane housing is still affordable compared to other markets, but wages are only rising 2.5% compared to the 7-to-8% increases in home prices. It’s not a problem yet, but it warrants watching.”

Forsyth is concerned that consumers have developed an interest-rate dependency and he wonders how the housing market will react to even a small interest rate increase.

“Home sales and prices are up for both the quarter and year-to-date,” says Higgins. “The average price and median price were up 6.8% and 8.1%, respectively, for third quarter year-over-year in 2015.

“Looking ahead, there will be the normal seasonal lull in home sales, but the numbers should stay ahead of last year’s, and take off again in early Spring 2016,” Higgins says. “Employment in Spokane County remains stubbornly below 2008 levels and our area has slightly more homeowners carrying negative equity and a somewhat higher foreclosure rate than the nation. In addition, although median income is rising, it still trails state and national levels. The good news — and I believe it will be even better in the fourth quarter of 2015 and throughout 2016 — is that these gaps are narrowing and we increasingly have the tools in place to eliminate them quickly and entirely.” 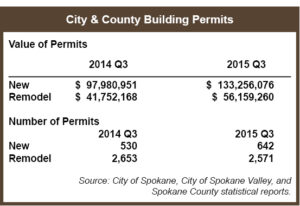 Scranton characterizes permitting numbers as “very healthy,” pointing out that overall permitting valuations were up 35% for third quarter 2015 compared to the same period in 2014. Both the City of Spokane and the unincorporated county show valuation growth, while the City of Spokane Valley was down due to a lack of large projects.

Scranton notes that most construction seems to be demand-driven rather than speculative, which is a good sign.

“On the commercial permitting side,” says Forsyth, “it is stronger than we have seen in years for retail, office and industrial, but particularly for industrial, which has been slow in previous years.”

“Permitting really picked up in the middle of the year,” says Forsyth, “taking off in July for both single-family homes and apartment buildings. Most new housing is going in just inside or just outside city boundaries where there is undeveloped land. If you take out Kendall Yards, most of the new housing is not in the City of Spokane’s urban core.”

For overall Spokane County, permit numbers increased almost 1%, while valuations were up significantly at 35.6%.

The number of permits in the City of Spokane Valley was down a relatively small 2.3%, but valuations dropped much more significantly – nearly 36%.

Unincorporated Spokane County had impressive numbers — a 2.3% increase in the number of permits and a 39.6% increase in valuations.

Spokane International Airport continued its year-over-year increases for the third consecutive quarter in 2015. Total passengers in third quarter increased 6.5% while cargo grew by 5.3%.

He says current passenger travel is in line with the typical mix of 55% leisure and 45% business. This is determined by a survey of airport customers that takes place three times per year. The airport continues to receive high ratings for convenience and efficiency, just recently being ranked the seventh most-efficient airport in the United States.

The airport has concluded a cycle of six years of major investments in airfield improvements including runways and taxiways to meet current safety standards and to extend the life of airfield pavements. The next significant capital improvement cycle will focus in and around the two terminal buildings.

No inflation this quarter

“The CPI reflects the decline in commodity prices, particularly energy prices,” says Forsyth. “Even if food and energy are excluded, inflation is within the comfort zone for the Federal Reserve.”

“In 2016, I anticipate the CPI will continue to stay within the low levels we have been seeing for some time,” says Scranton.

Forsyth notes, however, “The Fed has created such anticipation that I believe it will be difficult not to have the first modest interest rate increase within the next six months.”

Grant Forsyth: I am watching two issues that could greatly impact our regional economy. The first is weather-related. Will we have another year of water shortages because of a diminished snow pack due to El Nino? And what will our fire season be like next summer? The second issue is how quickly the new WSU medical school can be grown to full capacity. There are logistical issues, the need to attract quality faculty and students, the lack of an established reputation, the timeline in successfully gaining and implementing grants, etc. I am fairly optimistic the medical school will be a success, but I have concerns about how long it might take.

Doug Tweedy: After several years of diversified job growth with higher-than-average pay, employment in the next year will increasingly be in retail, leisure and hospitality. Recreational employment levels are similar to last year but are lagging behind normal levels because of summer fires and lower-than-average snowfalls.

Steve Scranton: The benefits from lower gas prices and lower import prices bode well for the economy in 2016. I anticipate economic growth in the same range as 2015, barring any major unexpected shocks.

Shaun Higgins: The strong U.S. dollar will make it more difficult for those doing business in sectors, including agriculture, that compete on the world market. Other possible negative forces include slower growth in China, a rise in domestic interest rates, election-year jitters, a decline in consumer confidence, and unusual disruptions in the supply chain or information infrastructure. However, it would take an unlikely confluence of major, multiple and unforeseeable developments at higher levels to significantly slow the momentum of the local economy in 2016.

The Spokane Regional Business Barometer is a quarterly publication written by Debbie Rauen of Legendary Hills Communications, highlighting the Spokane economy and local economic trends. Data for the publication is assembled by the Eastern Washington University Institute for Public Policy and Economic Analysis.