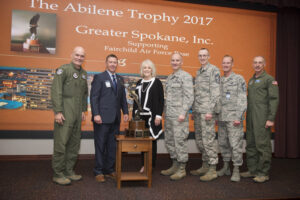 The Spokane region was selected as the community recipient of the 2017 Abilene Trophy during Air Mobility Command’s Phoenix Rally. Greater Spokane Incorporated accepted the award on behalf of the community. Sponsored by the Military Affairs Committee of Abilene, Texas, the award recognizes outstanding community support of its base.

The award was presented by the Abilene Chamber of Commerce’s Military Affairs Committee in front of more than 181 Total Force wing commanders and command chiefs from across the mobility air forces.

“The Greater Spokane Community has a rich history of involvement and shared pride with Fairchild Air Force Base (AFB) and Air Mobility Command’s brave men and women in uniform,” said Yvonne Batts, co-chair of the Abilene Military Affairs committee. “The Spokane community continually works to find new ways to maximize partnerships and serves as an example for military communities everywhere.”

The Spokane region showed exceptional support for Fairchild AFB last year, including advocacy efforts for projects and KC-135 tankers, annual events such as Let Freedom Ring and Spokane Lilac Festival, through the donation of holiday gift cards for military families, shipped care packages to deployed personnel from the base, and provided community insights, and avenues for Team Fairchild families to integrate into the community and enjoy local events.

“I can’t think of a more deserving community to win this award,” said Col. Ryan Samuelson, 92nd Air Refueling Wing Commander. “The entire Greater Spokane region has supported the base through everything. Whether it be through crisis last year, supporting us in the airshow, and all the innovative programs they’ve initiated to integrate Airmen into the community.”

In addition, GSI jointly hosted a first-of-its-kind TEDx-style leadership conference at the base theater called Leaders Inspiring for Tomorrow or LIFT. The conference featured 19 storytellers of various backgrounds and experiences whose topics included military, business, community, and life.

“As the Spokane region’s largest single-site employer, Fairchild Air Force Base contributes substantially to the economic viability of the region,” said Todd Mielke, CEO, Greater Spokane Incorporated. “We’re proud to partner with so many key individuals and organizations in our community to support our base including GSI’s Forward Fairchild Committee, the Washington Military Alliance, and Operation Spokane Heroes.”

“Fairchild AFB and the men and women on active duty, in the Reserves and with the Washington Air National Guard who complete the many missions assigned to the base are an incredible asset to our community – one that we work hard to make mutually beneficial every day,” said Kevin Twohig, Chair, Forward Fairchild Committee.

Fairchild Air Force Base employs nearly 4,500 active duty, Washington Air National Guard and Army Reserve, and 1,475 civilians. The base contributes an annual economic impact of approximately $1.2 billion to the Spokane regional economy. In collaboration with key partners, GSI prepares and submits the Abilene Trophy application for this annual award.