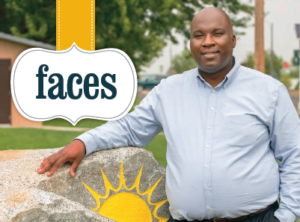 Albert Trip ventured west from his hometown of Birmingham, Alabama 15 years ago to finish school. When he got to Washington, he quickly realized that he had found his new home.

“One of the main attributes that drew me here was the access to higher education. There are a variety of affordable options to choose from and so many educational opportunities for students. I was fortunate enough to have the opportunity to stay.”

Albert says the variety of educational opportunities in Spokane means the city also has a great talent base for the local workforce. And, he says, those graduates can look forward to finding work here for a long time to come. “The Spokane area is seasoned for growth. The opportunities are here. Historically we’ve seen it and now it’s happening again- Spokane is only going to continue to go upwards.”

Another thing that make Spokane special to Albert is the assortment of lake and mountains. Birmingham is also mountainous- it’s located at the southern end of the Appalachians- but those are mere hills compared to the scenery Albert loves in Washington.

“The mountains and the beauty of the Northwest and nearby Canada are just incredible. And with the surrounding lakes, there are so many places to hike, camp and explore. There really is something here for everyone and much of it is five or 10 minutes away.”

When he has time, Albert says he likes to hit one of Spokane’s many golf courses. “I love the courses here. There are so many and there is so much diversity among them. And they’re really affordable. The rates are unlike anywhere else. They’re unbeatable.”

But one of the area’s best attributes, he says, is the hospitality. “In so many respects the Inland Northwest is inviting and welcoming. It’s a large metropolitan area, but even with the populations and geographic size it has the feel and intimacy of a much smaller community.”

As City Manager of Airway Heights, Albert knows the economic impact Fairchild Air Force Base has on the area. But his family also feels the impact of it personally.

“The Spokane region would not be the same without Fairchild. Airmen contribute to the area in so many ways. My neighborhood is mostly service members, and they’re all extensively involved with coaching sports teams, being a part of festivities and more. Everyone benefits from them bringing their unique experiences and talents to the community.”